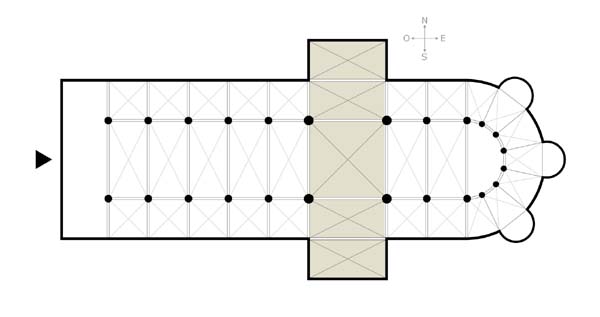 Part of the church, the nave perpendicular to the axis of the church, located between the chancel and the rest of building. In the two-chancel romanesque basilicas, there are two transepts: the eastern one at the presbytery and the western one connected to the westwork. In the gothic cathedrals of England there are also two transepts, both from the east. Over the crossing of the transept and the central nave there may be a small tower, so called ridge turret. In the churches of the basilic system, the so-called pseudotransept is encountered, not isolated in the church’s plan, constituting only part of its body. A pseudotransept is formed by giving the height of the central nave to the aisles, with possible additional markings in the external architecture using the gables.