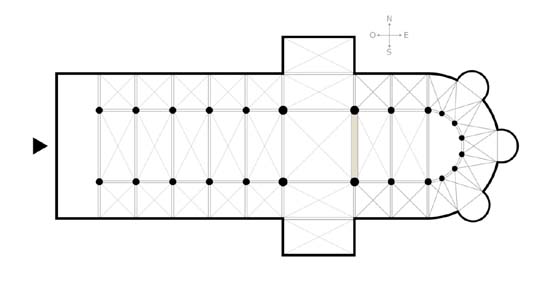 Brick or wooden partition in cathedral or monastic churches separating space reserved for priests or monks (chancel) from the part where could stay seculars (nave). The rod screen was a further development of the early christian choral divisions and most often had the form of an openwork wall with a door in the center, where there was a place for reading the gospel, preaching, announcing the ordinances, and showing relics to the congregation. Rod screen began to appear in late romanesque, in gothic its putting became the rule. This solution divided the community of the Church, consolidated the division into clergy and the congregation. The beginning of the Reformation caused recognition of the rod screens as an obstacle. In early modern times, according to the instructions of the Council of Trent, rod screens were mostly demolished, and their function as a sermon was taken over by the pulpits.